The Department of Philosophy is honored to provide scholarships for our students. Philosophy scholarships are supported by the philanthropy of former students, faculty, and their families and friends. 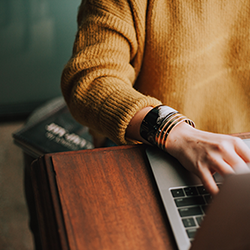 Dr. Anita Silvers was an internationally recognized philosopher and advocate for disability rights and a professor of Philosophy at San Francisco State University for over 50 years. She also served as department chair from 1981 to 1986 and from 2006 until her death in 2019. Dr. Anita Silvers was an ardent supporter of providing access to higher public education for students who would not be able to access such an education on their own.

Of her many accomplishments, one of which she was especially proud was being able to bring the Department of Philosophy to national recognition. Over the past decade, SF State’s master’s degree program in Philosophy has consistently ranked among the top 10 in the United States.

Benny & May Chin Scholarship in Philosophy

The donor of the scholarship, Kenny Chin, is the president of the Kenny and Maria C. Chin Family Foundation. Dr. Chin previously served as president and owner of a privately held import/export business he founded in 1987. Dr. Chin earned his M.A. at San Francisco State University in Political Science in 1978. He later earned his Ph.D. in Political Science from UC Berkeley in 1986. Dr. Chin’s dissertation focused on China's open door to foreign investments. Dr. Chin has strong interests in Chinese philosophy and political thought.

Kenny and Maria Chin have established this scholarship in honor of Kenny’s late parents, Benny and May Chin. The fund will support scholarships for promising students in philosophy. Preference will be given to those with an interest in East Asian philosophy or its intersection with contemporary ethics and political philosophy.

Benny & May Chin Scholarship in Philosophy

The Philosophy Graduate Student Tuition and Fee Scholarship for Fall Applicants is designed specifically for students who are applying as new M.A. students and will enter the M.A. program in the fall of the coming academic year.

Professor Anita Silvers was an institution in professional philosophy, and at San Francisco State University. She was a professor and chair of the Department of Philosophy at San Francisco State, and a nationally recognized advocate for disability rights. Disabled by polio as a child, Silvers was a leading advocate for equality for persons with disabilities. On the faculty at SF State from 1967 to 2019, Silvers worked to make access and disability services available on California college campuses. In 1980, she was appointed by President Jimmy Carter to serve on the National Council for the Humanities, the governing board of the National Endowment for the Humanities. Silvers was regarded as an authority on medical ethics and bioethics, social philosophy and feminism. The Silvers 50th Endowed Scholarship Award in Philosophy helps talented new scholars to develop their academic skills and pursue of the kind of intellectually engaged work that made Professor Silvers a remarkable activist and advocate for equality and justice.

The scholarship is open to qualifying undergraduate and graduate students in the Department of Philosophy.

Through generous donor support, the College of Liberal & Creative Arts offers students a broad range of scholarships. Scholarships are available from the College, schools and departments. Please search our listing below to find a scholarship that is right for you. All scholarships link to detailed information and the option to apply at the SF State AcademicWorks portal.