There is always a great deal going on both within the Department of Philosophy at San Francisco State and in the greater Bay Area philosophical community. Below are some of the things happening at SF State right now, both extracurricular and for-credit.

Enjoy lively conversation at Philosophy Club. Work with high school students as a coach, or participate at the college level in Ethics Bowl. Join SF State MAP to promote inclusion and diversity in the field of philosophy. Attend local colloquia organized by BayFAP or BAPS. Chat about philosophy on top of a local mountain with Philosophy Hike Club. 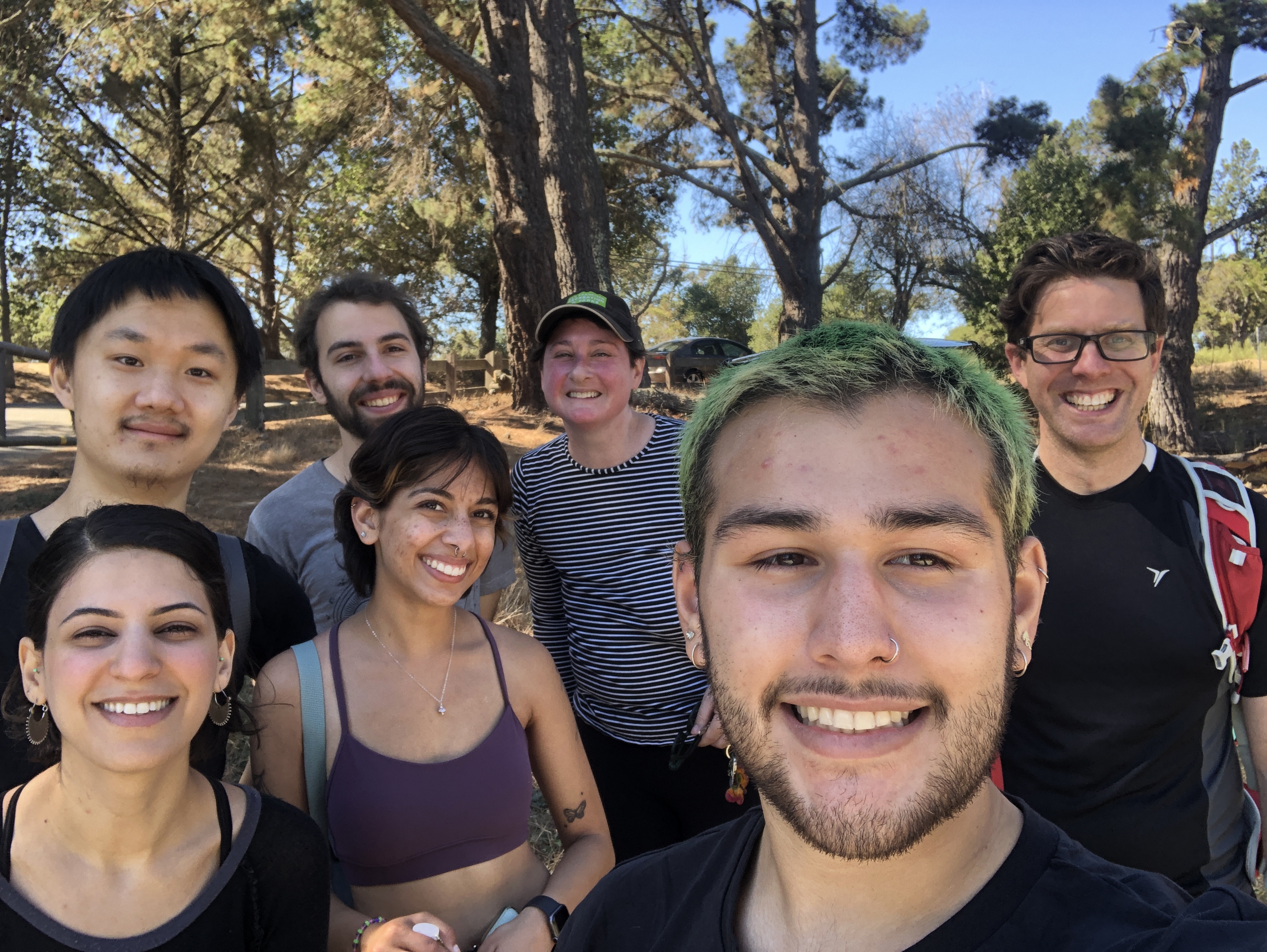 The Philosophy Club is intended to provide a philosophically diverse society on San Francisco State University’s campus and additionally aims at supporting students in achieving academic excellence. Club is a space that cultivates a supportive environment for those interested in studying philosophy at San Francisco State and other colleges or universities in the future. The role of Club within students’ academic careers serves to encourage students and facilitate the study of philosophy at San Francisco State University (SFSU). Furthermore, these efforts will be pursued with the hope of instilling a cultural appreciation for philosophical inquiry amongst the student body of SF State.

Philosophy Club meets and decides weekly to discuss democratically elected topics. Topic selection broadly encompasses all student interests, is inclusive of student assignments and presentations for their classes, and is time sensitive to the current state of the world. In translation, the open nature of discussion allows Club to fulfill a function of collective pertinence. In order to maintain attention towards the topic of the week, democratically selected member(s) put together a presentation, or deploy talking points for re-engaged, guided discussion. This may include a weekly paper that is salient to discussion, or by other educational aids provided by the weekly presenter(s). The operations of Club are not restricted to the format described, they are by all means collectively determined.

Undergraduates and Graduates of any major are all welcome. The Philosophy club is a great place to forge student relationships that help learning flourish. It’s also a good place to hear about additional departmental activities or guest speaker events, such as Ethics Bowl and Ask a Philosopher! We hope to see you there.

This club is in its very beginning. This semester it will meet to discern its focus and leadership. Next semester it will seek official status as one of the clubs sponsored by both the Department of Philosophy and SF State’s Gator Experience. Roughly and preliminarily, we envision that it will be the club for students who are more interested in religions and the more religious side of philosophy, and interested in philosophies and religions as ways of living. But we are open to many different visions for the club and invite you to discuss it. For information please email coordinator Alice Sowaal.

Once or twice a month, on Friday, Saturday or Sunday, one of our faculty leads a local hike. On past hikes, we have traipsed the Oakland Hills, hiked through Glen Canyon Park to the top of Twin Peaks and explored the Philosopher's Way Trail in John McLaren Park. Keep an eye out for an email announcement about the next Philosophy Hike Club!

What is AI Club? Our mission statement is as follows:

The purpose of Artificial Intelligence Club is to bring together students interested in learning about “Artificial Intelligence”, impart that knowledge, and share research with people who are interested in this field. The primary aims of the club are to bring together students from various disciplines to discuss and work together on current problems in AI, start AI related projects, and build a network of contacts with others who share similar interests. Students can also present their own work, workshop their papers, and the club will attempt to fund attendance at AI conferences. Finally, expert speakers will also be invited to come and speak at meetings to share their own work in the field.

If you would like to become a member, or would like to know more about the AI Club, please send an email with your Name, Grade, and Major to Eeshan Kumar.

Focus on a specific philosophical topic for a semester with guidance from a professor.

Selected instructors teach both 600 and 800 level courses (1-3 units) that offer students hands on experience with the process of publishing philosophy.

Minorities and Philosophy (MAP) is an international, student-run organization aimed at promoting the past and present work of underrepresented groups in the field of philosophy.

The mission of SF State MAP is to offer students at San Francisco State University, in philosophy as well as other departments, an environment free from stereotypes, epistemic injustice, racist and sexist ideology, as well as a platform to discuss the work of philosophers from underrepresented groups and literature on the philosophy of race, sex, gender, class, disability and other pressing concerns. We hope to help in opening philosophical dialogue around these considerations, by engaging in public philosophy and outreach on our campus and in our community at large.

We the members of San Francisco State University’s chapter of Minorities and Philosophy make it our mission to establish and maintain a safe and supportive learning environment for underrepresented groups in philosophy. As an all-inclusive group that will be available to both graduates and undergraduates, we seek to provide academic support through the following means:

We do so with the promise to uphold the following principles, however, let it be made clear that these principles are only enumerative and by no means exhaustive:

In joining San Francisco State University’s chapter of Minorities and Philosophy one agrees to uphold the above principles with the purpose of maintaining the mission of the group.

For information please email mapsfstate@gmail.com or reach out by email individually to coordinators Luke Quinton. The faculty advisor for MAP is Dr. Carlos Montemayor.

For the past six years, students of the SF State Department of Philosophy have been proud to participate as coaches for high school teams in the National High School Ethics Bowl program. Students have also competed on the intercollegiate team at regional competitions at schools like San Diego State University, Cabrillo College and Arizona State University. In the coming years, the program plans robust development and new exciting opportunities. Rather than adversarial debate, Ethics Bowl is focused on using respectful deliberation to apply ethics to real life problems.

Participate as a member of the intercollegiate team and debate in competition, earn credits, coach undergraduates or high school students, volunteer for mock competitions. There are many ways to get involved with the program!

For information, please email sfsu.ethicsbowl@gmail.com or reach by email out individually to coordinators Logan Maples and/or Dorian Lok. The 2021/2022 faculty advisor for Ethics Bowl is Dr. Macy Salzberger.

In this program, incoming students will have the opportunity to work with experienced graduate students in order to best prepare for higher education. Mentees will be able to learn about work expectations, helpful research sources, and all aspects of graduate life. If you are interested in participating or have questions, comments, or concerns please direct them by email to philmentor.sfsu@gmail.com. Please note that this is not intended to be a tutoring service, although graduate mentors may advise their mentees on helpful resources and approaches to philosophy.

Roughly once a semester we host “Ask a Philosopher!” during which students are invited to ask a panel of professional philosophers any questions (related to philosophy) that they want. Questions can be general — “How did you get interested in philosophy?” “What is philosophy, anyway” — or discipline specific— “What is metaontology?” “Why did the debate shift from talking about morality of affluence to global justice?” — or just a prelude to vigorous discussion — “Characterize the analytic/continental divide” “Do mathematical objects exist?” In short, it is a wide open evening that will be whatever students make of it!

The Philosophy Lounge is the center of life in our department, and key to our success in creating a warm, welcoming environment for students. Several clubs hold meetings there, instructors hold tutorials, and philosophy students in all our majors and minors treat it as a place to hang out between classes and discuss philosophy! Our yearly Welcome Party is held in the Lounge, as well as other notable celebrations. And during finals, study groups gather here to work together.