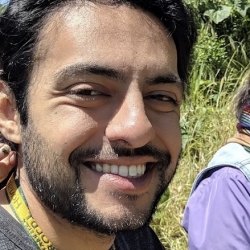 Hi, I'm Alexei Spindell. I was born and raised in San Diego, California and I got my B.A. in philosophy from Cal Poly Humboldt ("Humboldt State University" at the time). Having spent time in both Southern and Northern California, coming to the Bay Area feels like completing something!

The areas of philosophy that interest me are philosophy of religion, 19th century German philosophy, and aesthetics. Outside of school, I like to draw, spend time outdoors, and see live music.