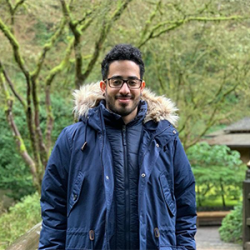 I moved to the U.S. in 2015 (from Kuwait) and received a B.A. in both Psychology and Philosophy from UC Davis in 2015. Now I'm pursuing an M.A. in Philosophy from San Francisco State University. The areas that pique my interest the most in philosophy would have to be philosophy of language, social ontology, and metaphysics! I'm always looking to learn about new areas of philosophy/things in general so feel free to throw some ideas in my direction.